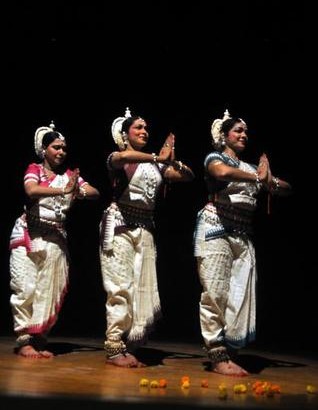 Celebrating Indian classical arts, the annual Guru Kelucharan Mohapatra Award Festival-2016 saw a rich repertoire of performances. The very first-day’s work inspired by the creative genius of Guru Ratikant Mohapatra brought together three Odissi stalwarts in three dance performances – Mangalacharan, Pallavi in raga Hamsadhwani and Nari – mythological stories of three women woven in a garland addressed women of contemporary times. The Sitas, Meeras and Sabaris of today are armed with the power of their decisions. That is the lesson that has percolated to modern times from these timeless personalities.

Aruna Mohanty trained under Gangadhar Pradhan brilliantly captured the persona of Sita in her portrayal. Expressional dance along with her ability to hold the perfect stances of pure Odissi dance are her strong points.

Meera Das, who aspired to learn Odissi, learnt Bandha Nritya under Guru Gangadhar Nayek, to start with. Later she honed her Odissi skill under Gangadhar Pradhan. As a student of Odissi Research Centre, headed by Guru Kelucharan Mohapatra, she learnt the finer nuances of the style. In the role of Meera, Meera Das was an epitome of dedication to her Lord Krishna. Meera’s unshakable love for Krishna could not be countered by the cup of poison given to her. Subtle tribhanga balance of steps, with devotional expressions marked her presentation.

The crowning event of the day, ‘Nari’ was based on a script by Kedar Misra. The stylistic range of three most celebrated dancers of Odissi – Aruna Mohanty, Sujata Mohapatra and Meera Das was remarkable. They danced to duets and solos and their seamless coming together was striking. The presentation was a coming together of different genres of Odissi.

Powerful mardala players, Guru Ratikant himself, along with Bijaya Kumar Barik provided the proper rhythm and action to the dance. Upcoming vocalist Rupak Kumar Parida was a success. Ramesh Chandra Das and Agnimitra Behera supported the trio with the sweet music of their violin. Srinivas Satpathy and Eklabya Muduli played the flute and the manjira.

On the third evening of the Festival organised by Srjan at Rabindra Mandap in Bhubaneswar, eminent dancer Rahul Acharya performed the all time impressive Harihara Mangalacharan set to raga Bhatiar. Acharya started his first presentation with “Harihara Mangalacharan” set to raga Bhatiar and Pahadi and taal-Ektali. The dance was choreographed by Guru Durga Charan Ranbir while the music was composed by Nirmal Kumar Mahapatra. Rahul presented a beautiful fusion of Shiva and Vishnu. Hari and Hara are different aspects of the same. Rahul has polished the technicalities of Odissi to a great finesse.

This was followed by “Pallavi” set to raga Chakrabak and taal Ekatali. Rahul’s third presentation was “Priya Charushile” followed by “Mokshya”. He made a slow and dignified entry with sweet music of flute and the musical ensemble along with the sweet beat of the manjira by his guru Durgacharan Ranbir. As Rahul made his offering to Madhusudan, he himself resembled Banka Bihari with his perfect Tribhanga. Sophisticated sculptural poses, hands spread out gracefully, rhythmical foot movements, square positions, flowering like opening of the fingers, placing his forefinger near the eyes and side of the cheek with elbow lifted pointing to the beauty of the eyes and lips, brought out the physical beauty of the dance while subdued expressions appeasing Radha when she is hurt at his infidelity was spiritually uplifting. A little more liveliness in rendition would have been even better.

Music accompaniment in manjira by guru Durga Charan Ranbir, in mardala by Niranjan Patra, in vocal by Sukanta Kumar Kundu, in violin by Ramesh Chandra Das and in flute by Srinibas Satapathy, enhanced the aesthetic value of the performance.